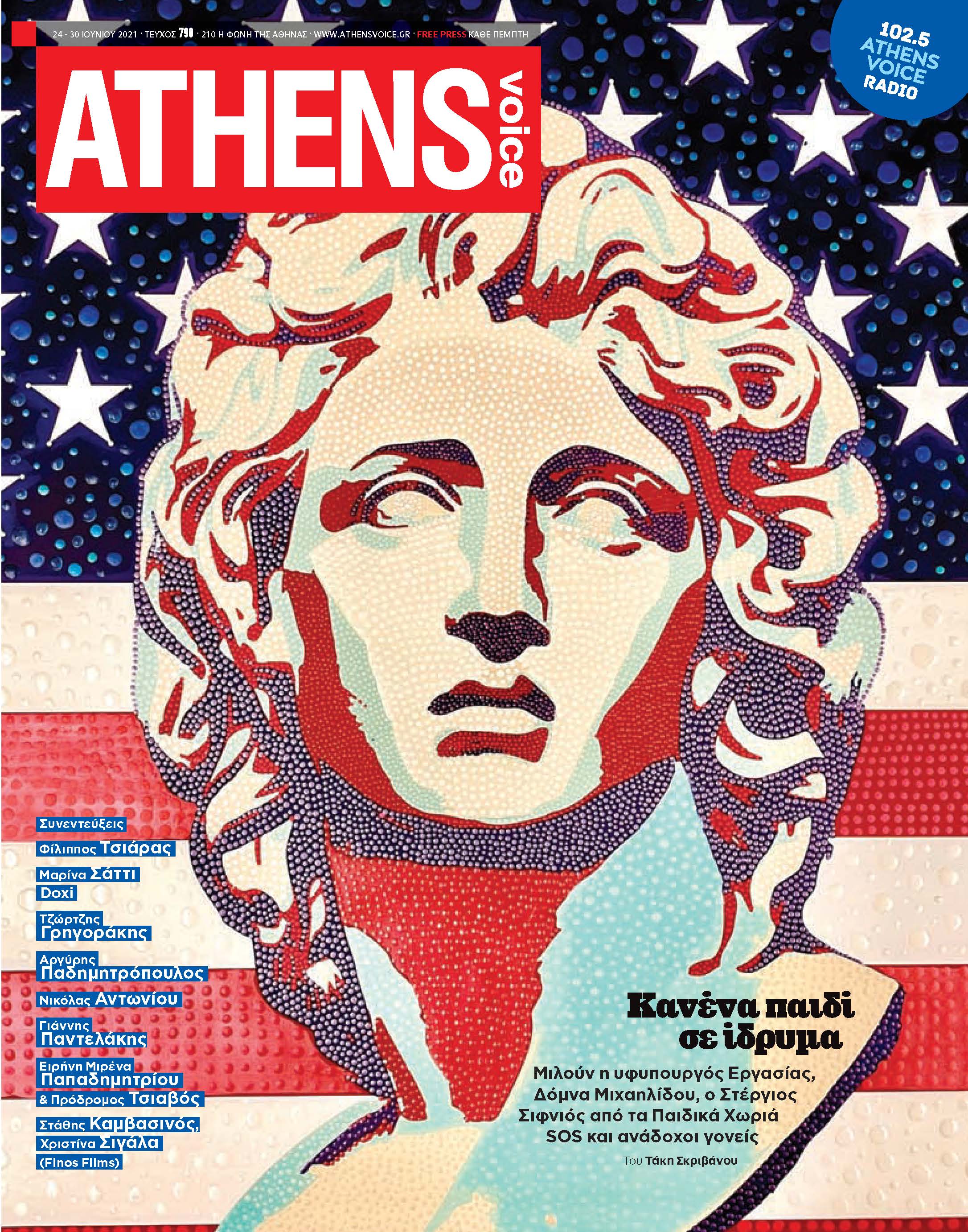 How do you feel returning to Greece with a new exhibition especially now during the era of the Pandemic?

I always feel like returning to Greece no matter where I am. That is the sad and joyous part of it. In other words, we Greeks of the Diaspora live a special dilemma, as to Who we are and Where we should be. We are bound to the culture that we grew up in, in my case American, the place where we were educated and spent our formative years-yet in our DNA is the Motherland, Ellada, the parched sun and salted sea, the mixture of senses, wild sage, oregano, and night-flowering jasmine. These are the inescapable things that remind, and then there is the visual beauty of this country that, as the Poet Seferis says, “wounds us”.

OK Now to the pandemic, another kind of “wounding”- this one more is actual than metaphysical.

Can you describe how the pandemic has affected you and maybe even your work in a particular way?

I think I can speak for practically everyone I know that Covid has changed all of our lives. It is amazing how a tiny little virus could bring the entire planet to its knees. I think what the pandemic did was to scare people into realizing what were the things that were really important, who were our true friends. It slowed down the pace of everything to almost a crawl, and gave us a forced look at ourselves and our lives, whether we liked it or not. It gave nature too something great, a moment to breathe again. The carbon footprint of the earth reduced radically, the air was for the first time clear in Beijing and Deli, and Dolphins retuned into the canals of Venice. It renewed us while killing us at the same time. Perhaps it was the Earth’s way of saying,
“Wait a minute, I am here too and your billions, and your garbage, and your pollution have consequences”.

What about the artistic component, how did it affect your work?

As you might well know, we had an idiot President Donald Trump, who did not take seriously the virus and as a result so many Americans died senselessly.

For me personally I was blocked from working for the first hard few months of Covid, primarily because people were dying all over the place, so obviously I didn’t feel like going out. Also there were restrictions and transportations issues, so it was almost impossible to get to my studio. Eventually things slowly opened a bit.

So, instead of painting I thought and wrote a lot. And thinking sometimes is better than painting!

What about in terms of your new work? Most of your new Dot Portraits seem to have been done recently, at least the Alexander series are all 2021?

Ok, after a lot of thinking, when I got the chance, I began painting very seriously again and with an enormous, new found pleasure. Covid had robbed me for a while of what I had taken for granted. Now when I entered the studio my time felt precious. It was as though I had rediscovered a lost love, my own art, I missed her and she missed me. What I am saying is, up until now, we were all operating on automatic pilot, exhibitions catalogs, flights left and right to different countries, more exhibitions, more catalogs, openings, receptions, and then all that came to a grinding stop. The New York Galleries that controlled the art world were closed shut. The auction houses that defined the prices went silent. There wasn’t a single soul to be found walking in Times Square. For the first time in a long time, the artist stood alone, without the support of institutions. But more importantly people, collectors, art lovers had the time to look again and appreciate Art with their own Eyes, not with their Ears. Without the manipulation of media, or the Gallery machine, an Artwork could now be viewed in isolation by someone remotely, as a pure object, it was a kind of cleaning, like those dolphins swimming up into urban canals. At least that is how it seemed to me.

Your entire exhibition at the Blender Gallery is of Dot Portraits of Alexander the Great, I believe around 20 portraits. Tell us why and what he symbolizes for you?

This is the first major exhibition I have made since of the Covid phenomenon.For the past 2 years I have been making portraits of personalities, Dot Pop portraits, in other words, a portrait made entirely of dotting. It is a painstaking, time consuming and highly detailed work. But the result is really special.
In 2018, I made the first New York exhibition of these portraits with personalities like Marilyn Monroe, Maria Callas, Mao, Warhol, Jackie Onassis, Lagerfeld, etc. I even had duets, where Trump and Putin, for example, were married together -two heads in one body.
When it came to preparing for the Greek exhibition, I decided to focus on one personality only, one of immense significance, and I chose Alexander the Great.

Did this choice have to do with the 200th anniversary of the Greek Revolution?

Yes, of course it did, but I chose an ancient character Alexander, who is powerful and beautiful and of almost mythological significance. Plus, Alexander is Greek Macedonian, as I am also Greek of Macedonian. The legend of Alexander’s Hellenistic conquests and importance have spread far beyond his known world, and has reached us, hundreds of generations forward, in all corners of the world.

Yes, Your depiction of Alexander is particular, it’s a kind of Romantic interpretation?

Romantic is a good word to describe the portraits. And how does one paint the image of perhaps the greatest Conqueror of all time, all done in less than 15 years? With complexity. So Alexander is depicted with strong chiseled features, masculinely beautiful as a man with a hint of femininity in his long blond hair. He is everything, he is all things, he is what myths, songs and legends are written about. But above all Alexander the Great is the “Ultimate Hellene”, the revolutionary of Hellenist culture.

You have him depicted in one work with the American Flag as background, interesting but strange?

That it piqued your curiosity is step one for the Artist!
Think of Imperialism, think of Greek American, think of what Alexander might have done
had he lived 20 years longer, think of conquering nations, think of the rise and fall of empires.Think that’s what important. That is the whole purpose of Art-to make you Think.

What are your exhibition plans going forward after Athens?

Simple
Back to making more Art.
Receiving an award the 30th of September at the Zappion
Opening exhibition of Portraits in London October 5th
Churchill, David Bowie, Paul McCartney, Queen Elizabeth
And, of course, Our beloved- Alexander the Great. 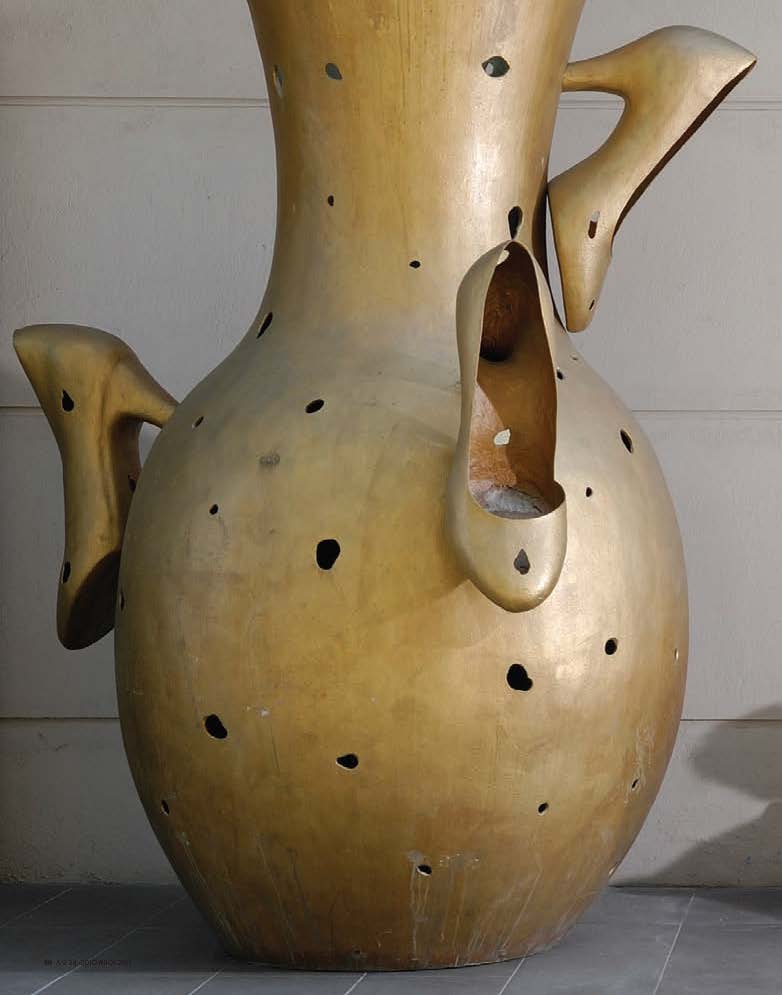 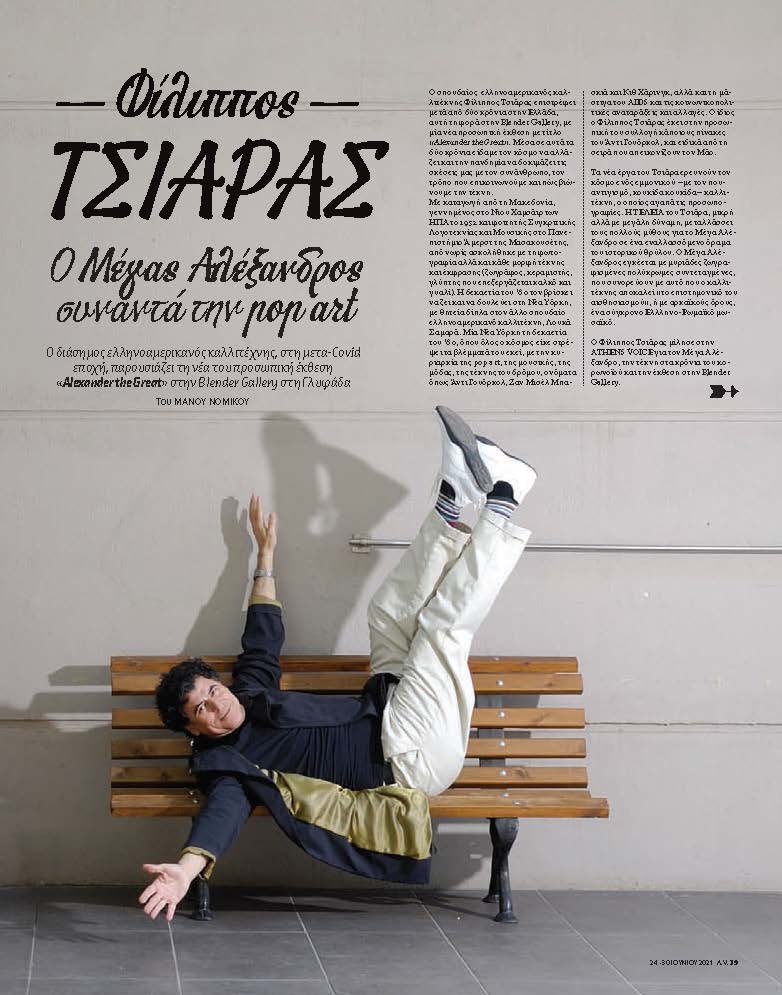 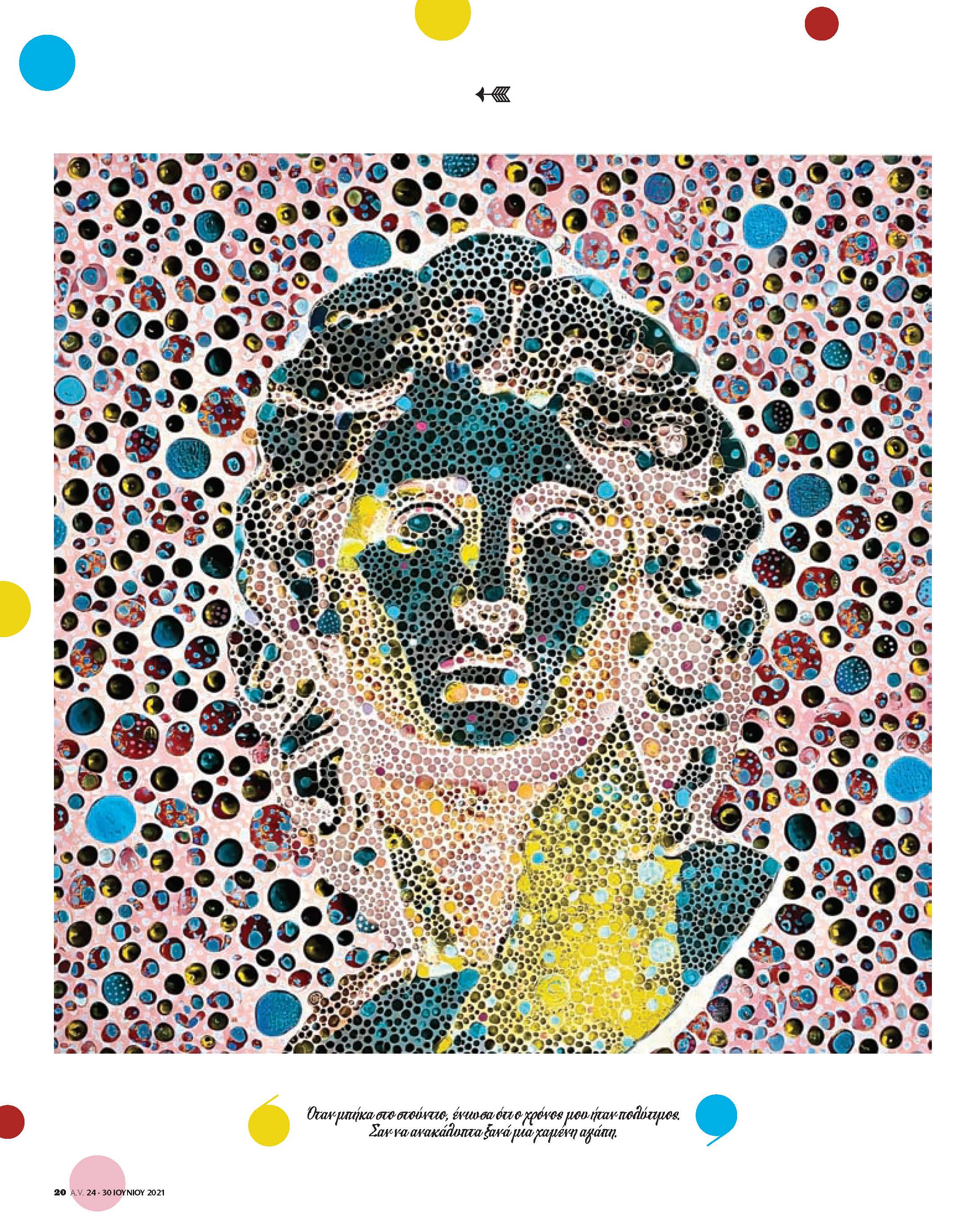 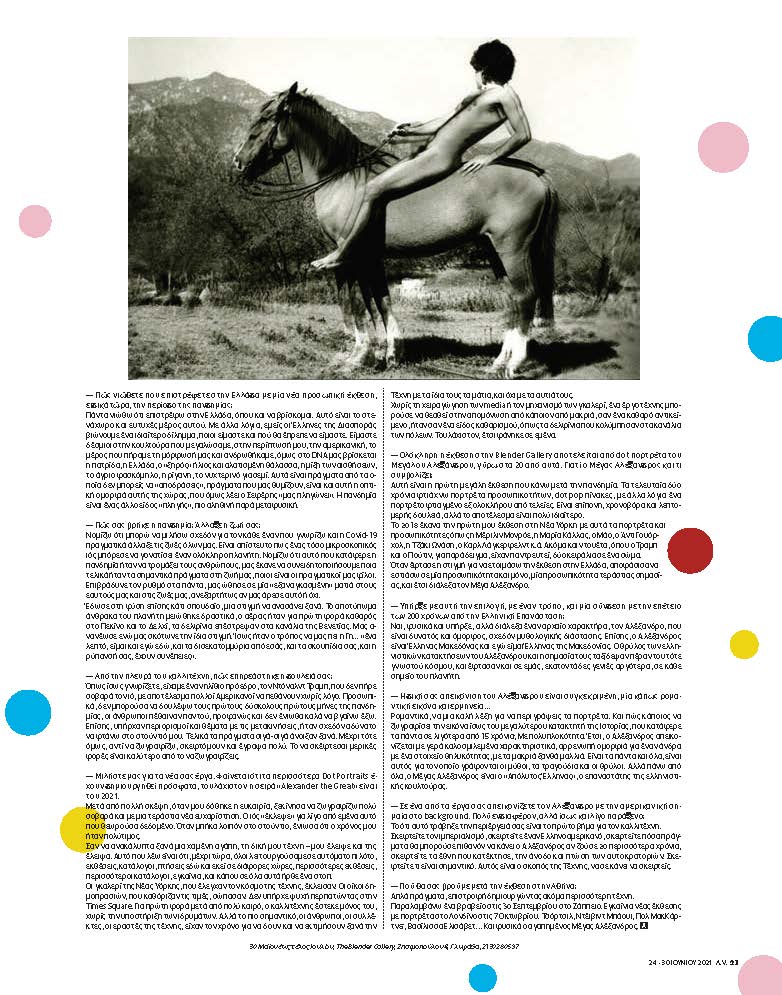