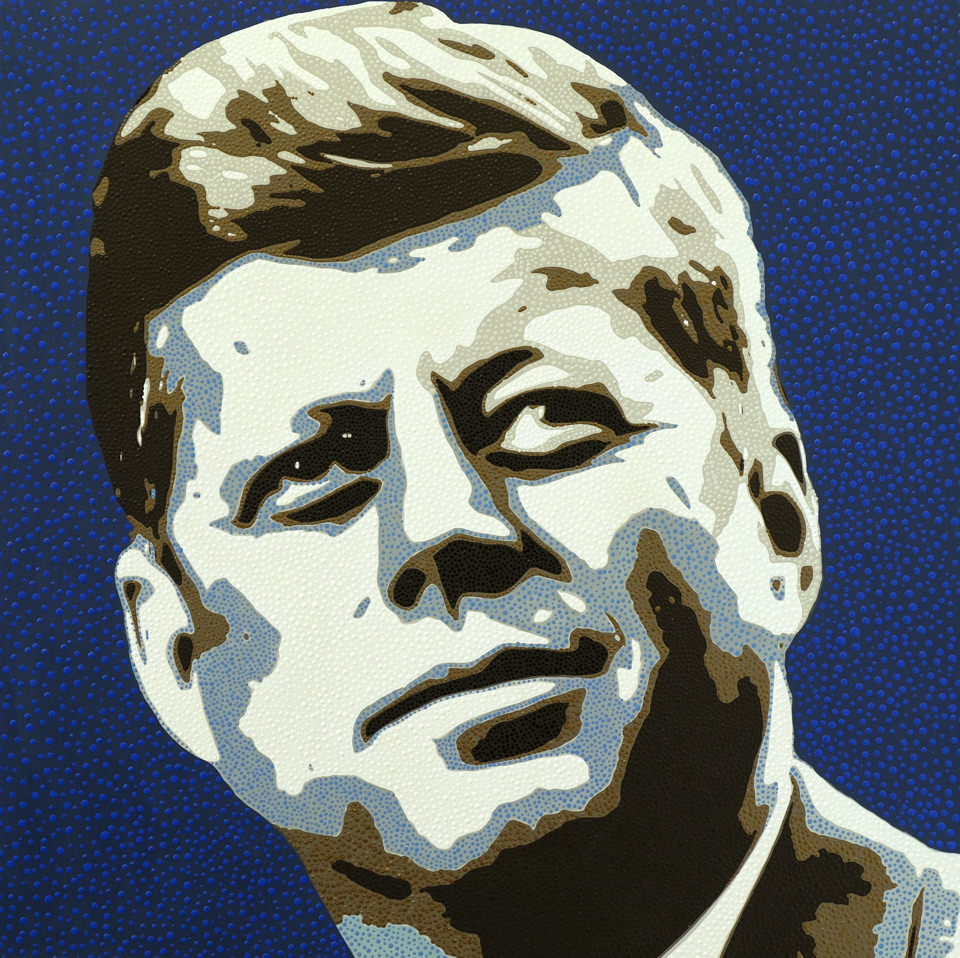 Philip Tsiaras  has had a rather renowned and highly lucrative career as a contemporary artist of international acclaim. What with the multiple one-man shows and appearances for four decades across the globe and counting.  Not to mention the shows (2) at the most prestigious art fair of them the Venice Biennale.  And of course, the fact that his work is included in the permanent collections of some of the world’s leading museums including the Metropolitan Museum of Art in New York City.

the early 80’s with his arresting fine art photography.  Most notably a series of witty images of the photographer, then at the height of his swarthy virility, prancing around in photos behind his family members all glum and serious, and who hardly realized that he was virtually partially nude in these series of cheeky images.  ‘’The Self-Hood’’ of this early exhibitionism was an immediate sensation

and a career was born.

Tsiaras is a prolific artist who has mastered many mediums to impressive effect. His work with bronze and glass are especially noteworthy.  Now he is staging his first solo show in New York City in quite some time with a dazzling new series of mixed media work on canvas at the buzzed-about HG Contemporary along the Chelsea High Line on 23rd Street.

The catalog refers to this new work of Philip Tsiaras as ‘’bravura dot Pop Pointillism’’ of iconic personalities.  There is a reasonable argument to be made that this new work is a shameless nod to Warhola and Andy’s iconic silk-screen portraiture.  ‘’This is more about my coming full-circle,’’ the artist begged to differ

as we sipped Rose in his vast art cluttered home in FiDi (Financial District). ‘’The whole dot Pontilist technique I learned at my first job as a Studio Assistant to Lucas Samaras.  Add to that the fact that I have been collecting Warhol’s for decades.’’

And so the artist has debuted his latest painting technique, a new painterly language which his art dealer Philippe Hoerle Guggenheim rightly lauds as a ‘’tour de force!’’.  As such the arbiter here sought to assuage this new found curiosity for the man behind the art and so without further delay…the GWQA with

GEORGE WAYNE – To call this new series of your work an obvious nod to Warhol would be a fair exclamation.  Yes or no?

PHILIP TSIARAS – Yes, to some degree. I wanted to reinvent the Warhol portrait and recreate the sensation of that exciting Pop period with high intensity.

Century – Dot Pop Pointillism.   Walk us through the process here. This all seems to be truly tedious, time-consuming work…

These are painstaking, detailed surfaces with a collective amassing of colored points. The Dot is the essence of everything, it is part and particle of the universe, a cluster of a thousand points,

In simple terms think of it as an elegant ballerina with callous toes going On Point! ( laughter)

GW – Is this new work a departure for you?  If so how and why?

PT – Yes it is but not a total departure. In general, my work is painterly, gestural, sensual and deals with issues of abstraction. However, I began many years ago as a black and white photographer, and the portrait was an early aspect of my work. These painted portraits take me full circle to my roots– with an educated and informed twist.

GW-  You have staged one-man shows from Moscow to Hong Kong to Newport and all over the world.   Have you ever had such a wonderfully energetic and spirited opening night, as it was the other night, at the HG Contemporary along the Chelsea High Line?   It was the most fabulously exuberant opening night I’ve ever been to at that gallery.  What did you think about the evening?

PT-I loved it, and although I have had some wonderful openings over the years, the HG Opening was particularly stellar.

GW-  I think the vibrant colorful art featuring easily identifiable celebrity icons had much to do with the exuberant joie d’vivre that night!  Have you been happy with the sales of the work so far?

PT- I really loved the opening, rejoicing in the final reality of a long hard process. It’s also great to see friends, collaborators, new people, family and some fans. All of that is the delight that the artist basks in on opening night.

The sales now belong to the commitment, charm and ability of your dealer.

I am sure with Philippe they will be good

GW- But where were the renderings of Elton John or Kate Moss? Two ever pertinent pop culture icons.  And how did you go about deciding who to render for posterity?

PT-  When I first started doing the portraits I thought to begin with Dictators, Stalin, Mao, Hitler, Gadaffi, etc., but their presence made a dark feeling in my studio, so I moved to lighten the message for myself because you are linked to the aura of the character when you work on them. Later on I decided to challenge the Warhol mystique..

GW-  Dot Pop Portraits is an ordinary exhibition title as you could get.  The work is hardly banal, on the contrary. Tell us about that.

PT- Ok. What do you call an exhibition that has a million hand-painted dots creating the faces of world-renowned characters? You keep it simple, you use the seeming banal, you want to be accessible.

Pop Art heralded a new world in the 60’s, a magnification and deification of popular, ordinary subjects. So DOT POP is– minimal and pure, like a can of Campbell Soup.

GW- What are your thoughts of this whole artificial intelligence phenomenon which is clearly creeping ever more and more into the artistic mindset of 21st Century contemporary art?  Talk in even more detail about the creative process here and the use of algorithms in some of the work.

PT- I have always been a purist, even in my photography it was always analogue and hand printed, no Photo Shop, etc. However, in these new portraits, I jumped into the 21stCentury. We created an algorithm to collect information and patterns from my paintings and fuse them into the nexus of the portrait. Whatever creativity that the Internet availed, was still overwhelmed by sheer, excessive, hand painting. As if to say, the human hand is still greater than the machine.

GW- As an artist, you clearly feel at ease mastering many genres.  You started your career as a fine art photographer.  You have done stunning works collaborating with some of the world’s leading artisans …masters of ceramics and glass etc.  Talk about this aspect of your art.  And this clearly self-confident vision you have displayed for almost 40 years and counting!

PT- I believe that the artist is an ultimate creator. That means there are no bounds, and no medium boundaries. Making glass for me in Venice is no different than producing a clay ceramic in Athens for the making of a bronze sculpture in Verona, or a large gestural painting to be the backdrop for a modern dance company in NYC. In other words, the artist traverses materials effortlessly and with pleasure, as each material helps evolve and reveal the inner self.

GW-  Word is that you are a collector yourself and actually have quite a trove of artworks including many Warhols,

Talk about that for a minute.  When you started collecting Warhol and why…?

PT- About 15 years ago owned a landmark building with my brother in the Seaport of Manhattan, I also used to consult many collectors on what artworks they should buy for themselves. When we sold the building I had the money to buy for myself what I recommend others should get.

It’s called “putting you money where your mouth is” !

GW-  Your gallerist Philippe Hoerle-Guggenheim has dubbed your work ‘Pointillist Bravura’. How do you feel about joining forces with this rather young maverick

PT- I like working with Philippe. He is not afraid to take chances and is anxious to find new good art, a little like an artist who is equally troubled to make that new work.

Philippe is also comfortably European, well bred, educated and worldy, something not typically New York. I think we speak the same un-american language.

GW- His is a gallery known for being cutting edge and pushing the envelope.

His other artists Retna and Massimo Aginostelli come to mind.  But he clearly has a weak spot for commercially driven Pop Art such as that of one Jan Larsen and now this new work of yours.  Talk about the importance of creative energy and rapport with the gallerist and what you have learned over your many years?

have to find the magic in the relationship that links you both to the creative process. He for loving what you do, and you for believing that he will make the rest of the world love it too. The gallerist has to believe in his artist as a religion, he must proselytize and sell the bible.

GW-  You began your career as a protege to the Pace artist Lucas Samaras.  Talk about that mentorship and what you learned in your youth from Samaras that you still regard and maintain to this day.

PT- Lucas Samaras is still highly regarded by all the younger generations as an avant-garde spirit. He was himself a fringe of Pop Artist and thought the Warhol Factory at that time, and all of its chaos, would not be good for me.

Samaras’ work is infinitely detailed and emotionally challenging. He is a notoriously difficult person, and as a result I learned much from him.

GW- Is your work in the permanent collections of any world-class museums?

If so tell us where?  And what makes you the proudest.

PT- My work is in many important collections and international museums, but I am sure the proudest would be the permanent collection of the Metropolitan Museum in New York. They have bought my work on several occasions over the years, but the first time was in 1982. In truth, when it happened back then, I felt as though I my organs were being massaged by Egyptian deities taking me to the afterworld. (laughter)

GW- And discuss your provenance in a bit more detail as a child of first-generation immigrant parents from Greece and you were born in New Hampshire.

PT-  What can you say about the old days. My father was exiled from Greece for leftist political beliefs, and the 4 boys, my brothers, Father and Mother embraced the American dream.

America was wealthy, innocent, and naïve,

A kind of paradise.

GW-  How would you take it…how would you feel, for instance, if one day sitting in the HG Contemporary one day and observing others observing your art.  And to hear someone say – ”Well Warhol, did this first, and did it better…”  What would be your response to that critique?

PT-  He didn’t do it better, and I think Andy himself, and I knew him, would have been fascinated by the ultimate direction I have taken here.

I still revere him but revised his early ideas with specificity.

GW- Thank you for this tete-a-tete and as this show travels on to the HG Contemporary in Madrid …how is that making you feel?  Nothing can match the joy and magic of the artist taking his show on the road.  To that, you can only concur with GW!

PT- I have never shown in Spain although I have shown for years in Europe. Italy was my magnet, and Spain seemed somehow to have evaded me– or I it.

But this Fall I will show in both Madrid and Barcelona. 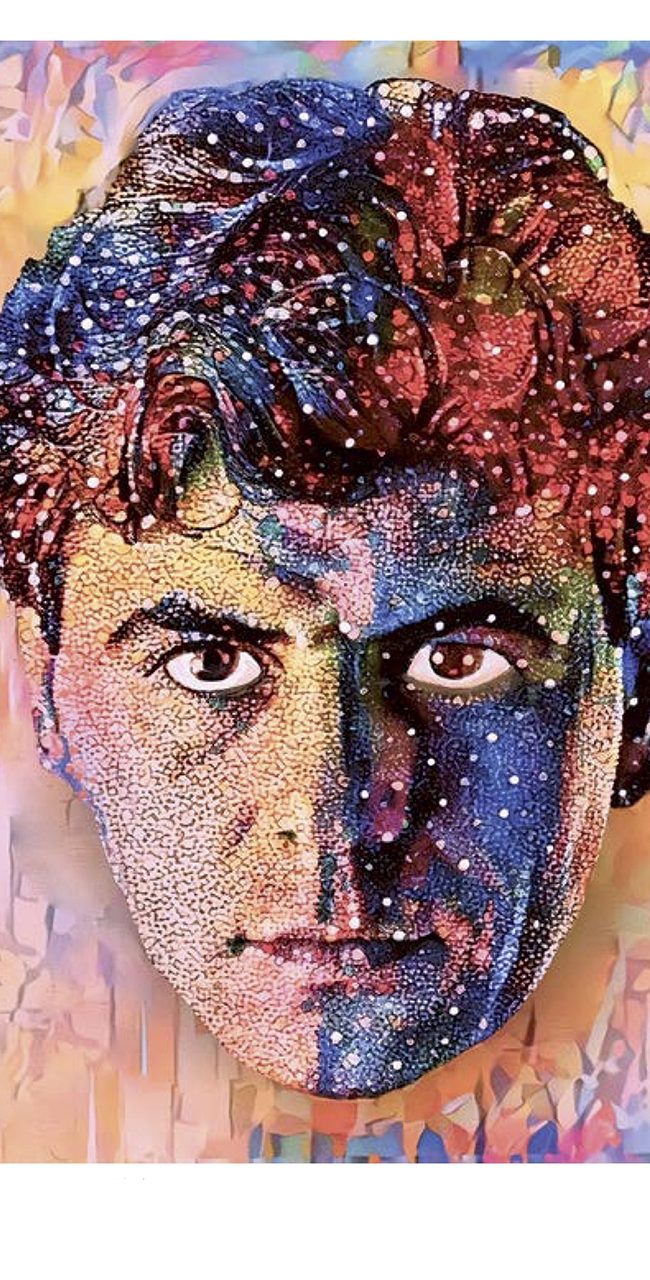